The TRIZ matrix is probably the best known tool in the toolbox of the method. Most people are not aware that the 39×39 TRIZ matrix by Altshuller, which is being used everywhere, was only one step in the development of this tool. The step that Altshuller himself still went along. At the end of his creative phase, on the other hand, he advised against the use of the matrix. Better tools like the ARIZ should be used.

But the tool was already so linked to TRIZ that even a letter from the founder couldn’t stop his comrades-in-arms from continuing to use it. Yet the basic idea of the matrix is as simple as it is ingenious:

“Formulate your development contradiction in general terms, and I’ll tell you which universally valid innovation principles the world has used to solve this problem.”

The matrix still has its charm and therefore continues to be used.

But everything in turn…

Altshuller himself still formulated the principles 41 to 50, which, however, did not make it into the public list.

Various examples of the 40 innovation principles can be found on the Internet. In most cases, the examples are only described in text form. We have therefore endeavored to illustrate our examples with at least one picture in each case. You will find over 400 examples in our app:

First attempts of a matrix

The earliest matrix I have ever seen was shown to me by Boris Zlotin in his house. It shows some principles and their assignment to tasks. This is still far from the well-known 39×39 matrix, but this is what the beginning looked like: 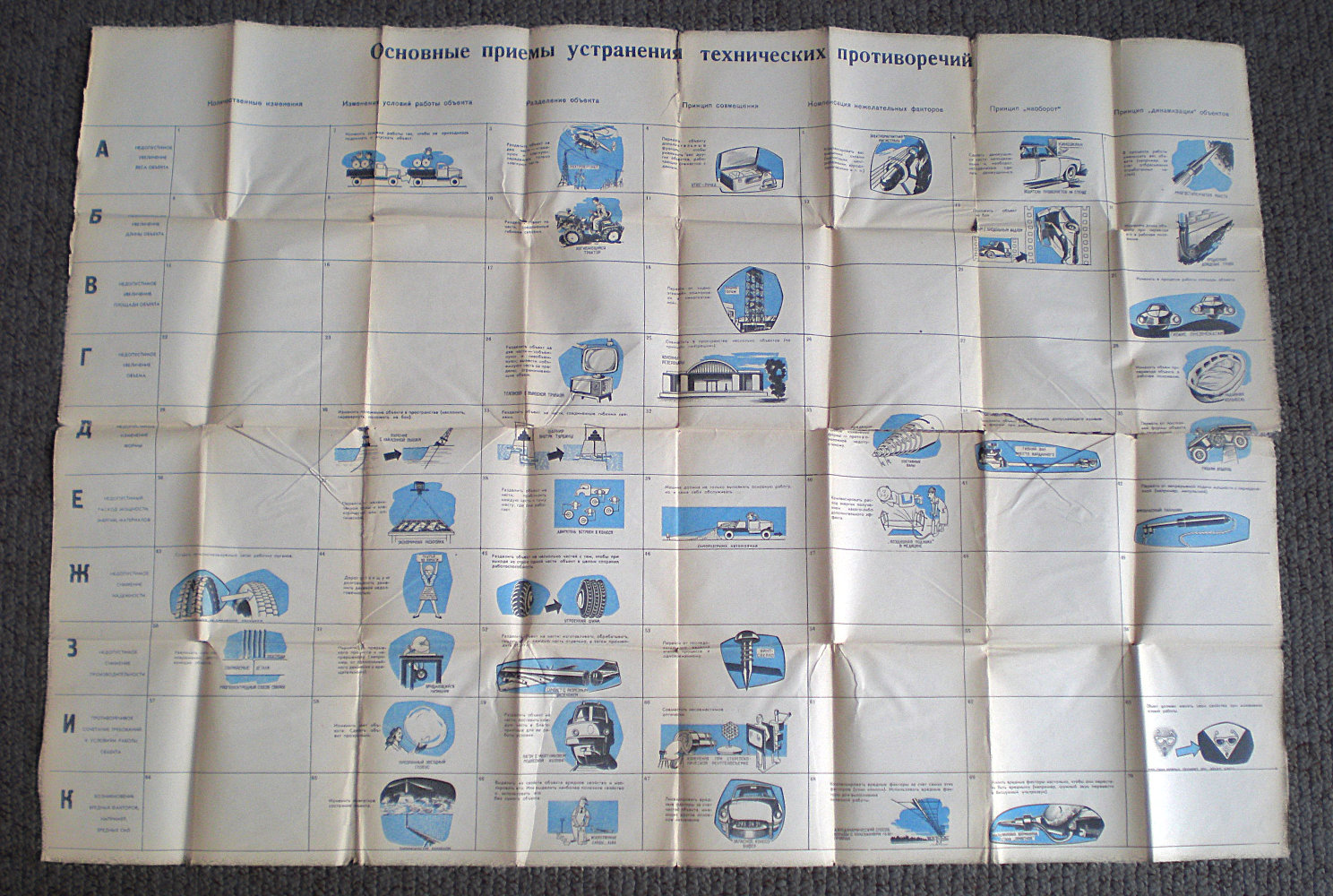 When TRIZ teachers talk about the TRIZ matrix today, they usually mean the 39×39 matrix. This was the last stand, which was co-developed by Altshuller. In it, there are 39 improving parameters and 39 worsening parameters. So, if I have reformulated my technical problem into a technical contradiction along the lines of “IF I improve this, THEN one will get better, BUT the other will get worse!”, I can identify the improving and worsening concrete parameter from the THEN and BUT part. These concrete parameters are then transformed into one or more abstract parameters. Then, using the matrix on the intersections of these parameters, one can find a number of innovation principles that are most appropriate for the contradiction under consideration. They are now to be applied in the order in which they are mentioned in order to resolve the contradiction.

Altshuller’s matrix is also fondly referred to as a contradiction table or matrix. It is probably the most commonly found TRIZ tool on the web. Many people even believe that this matrix and the 40 innovation principles would be “the TRIZ”, although it is only a very small part of this powerful method.

However, the matrix is also somewhat controversial: for example, consulting the contradiction table may reveal an empty box. This means that no preferred principle has been found for this and consequently all 40 innovation principles apply and must be consulted. If such a thing can happen, what is the point of consulting the matrix? It is also complained that the work on the matrix came to a standstill in 1985. So what relevance do statements about patents up to 1985 on modern products have?

Despite these shortcomings, Altshuller’s matrix is still widely used. We also do not want to withhold it from you and offer it for download:

To compensate for the inadequacies of Altshuller’s matrix, a group led by Darrell Mann ventured to update the matrix and examined patents from 1985 to 2002.

The most important finding was that the 40 principles of innovation still hold true – they could be confirmed. It was also found that some principles occur more frequently together and that for some principles only parts are invoked in a specific way. Therefore one formulated 37 combination and special principles, which represent even combinations and/or parts of the already well-known 40 innovation principles.

With the contradiction table, the TRIZ matrix, one improved however: The 39 technical parameters were extended by new parameters and grouped into meaningful categories. Efforts were also made to assign the preferred principles to each intersection point of the matrix. Synonyms for the parameters were described and the preferred principles of a parameter, regardless of its degradation. All this was recorded in the book “Matrix 2003”, which is not in stock anymore. For the work with the Matrix 2003, please use the newer book “Matrix 2010” (see below).

A participant in our courses has programmed an Excel tool that allows you not only to find the best principles for several improving and deteriorating parameters, but also to generate a heat map. With the heat map, you can find the places in the matrix where the principles you specify occur most often. For example, you might be interested in where innovation principles 1 and 12 appear together most often. The heatmap will show you these places in light red. This approach makes sense, especially with the Matrix 2003, because you have grouped the technical parameters together. In Altshuller’s matrix, these parameters are still unordered. Darrell Mann has also allowed us to provide you with this file, which we are of course happy to do.

If you have any questions about using the matrix, we and programmer Rayk Glasenapp will be happy to help.

With the Matrix 2010, the Systematic Innovation Team led by Darrell Mann has continued work on the 2003 matrix to make the TRIZ matrix even more precise.

In this edition, too, the 40 innovation principles remained untouched for the time being. The 48×48 matrix has become a 50×50 matrix and 42 combination and special principles are described. There are also notes in the book on how to include solving approaches from nature. Synonyms of the parameters are again described, and what I particularly liked were search terms to help me find the innovation principles in patents.

Since this is the latest work on the subject, we are not allowed to publish this easily on the Internet. The author asks that you honor his work by purchasing the book.

The original is available as an ebook or PDF on Systematic Innovation by Darrell Mann directly: